skip to main | skip to sidebar

I hate being scooped, but when the dish is this juicy, I have to report it. The Daily Mail offers this lengthy expose of Harvard primadonna Niall Ferguson, who pulls in an estimated $7.5 million a year (not too shabby for a practitioner of America's fifth ranked profession). Ferguson, now a certified member of the international glitterati, has left his wife for Somali activist and filmmaker Aayan Hirsi. (They met at a Time Magazine party for the "100 most influential people in the world." How long before Aayan revealed her special Koran verse to him?

How long this one will last is unsure: this is not Ferguson's first extramarital dalliance. And how much it will cost is another big question. Niall might have to give up one of his three estates and a nice chunk of change to his soon-to-be ex and their three children. The poor boy. As he says, "I intensely dislike spending money, which means that I love big conferences where somebody else pays for everything... I am definitely a saver. Staying in cash seems like quite a good idea at the moment."

Love don't come cheap, Niall. This time you will have to pay.

Every decade or two, a university uses its riches to narrow the gap between its prosperity and its academic reputation. The results can sometimes be dramatic.

Duke, for example, used its tobacco fortune to transform itself from a sleepy regional university into a hotbed of academic vitality, best exemplified by its English department, which at its peak in the late 1980s, was as wild and crazy a collection of celebrity academics, shameless self-promoters, and pure geniuses ever assembled in a single department in any field anywhere. Until it imploded, that is. That’s the inevitable reality when you put a couple of dozen prima donnas in a room together, give one or two of them disproportionate power, and lubricate with enough sherry to really let their hubris loose.

In another legendary example, the University of Texas, never doing anything less than trying to be legendary, famously tapped its oil riches to create world-class departments in philosophy and classics, among others, temporarily depleting the ranks of some of its most prominent competitors.

And in a whole scale transformation, NYU went from being a mediocre, but expensive commuter university to a first-class institution, spending way, way beyond its means (you could say that NYU pioneered the go into deep debt to make a profit policy that would reach hypertrophic form in the go-go noughts). Of course, NYU has some incomparable lures, namely subsidized housing in the heart of Greenwich Village, even if much of it consists of what would pass as a public housing projects in other settings.

However NYU also offers a cautionary tale for the wannabe rich and famous. Its locational attractions couldn’t keep such celebrities as Walter Johnson from flitting away to Harvard or Robin D.G. Kelley from moving uptown before the lure of a celebrity girlfriend (and USC’s own ambitions) tempted him to Los Angeles. Other NYU hotshots (like Lauren Benton, who looked Brown-ward) might still be lured away in the future.

But cautionary tales be damned. The noughts turned every somewhat rich university into a wannabe Duke or NYU. When future historians look out onto the irrational exuberance of the early twenty-first century, they won’t be able to miss the extraordinary ambition of those rich American universities, public and private, who stuffed their classes with teaching assistants and adjuncts while using their gains to reach for the stars and lure them with astronomical salaries and perks.

The most interesting phenomenon of all, at least to me, is the way that a few second-tier universities, places with lots of money but rather less by the way of reputation, used their riches to try to vault over the competition. Who? How about Vanderbilt. The university of the First Tycoon was well-endowed but understaffed. Some smart people, but still a sleepy place dominated by frat boys from Atlanta who like to golf and the debuntantes who loved them.

All of that started to change in the last years of the boom. Vanderbilt aspired to be the Princeton of the South and, to do that, went right to the source. They lured away Princeton historian of gender and science, Elizabeth Lunbeck, and her husband, American political historian, Gary Gerstle (an ex-Princetonian in exile in Maryland). They seduced the erudite Peter Lake, Princeton’s senior early modern British historian, with a whiz-bang university professorship. They reunited Penn’s recently-tenured hotshot Sarah Igo and Yale's Ole Molvig who, like Gerstle and Lunbeck, had tired of commuting. And they lured Paul Kramer, a rising star scholar of U.S. and the world, who had been inexplicably sent packing by Hopkins. Along the way, Vanderbilt (finally repudiating its reputation as a bastion of southern, white gentility) diversified its faculty, hiring major scholars like Richard Blackett and junior scholars Anastasia Curwood (another Princeton product) and Brandi Brimmer.

That said, Vanderbilt seems to have put most of its energy into bolstering its American history program--the recruitment of Lake, Molvig, and a few bright lights like Islamist Leor Halevi (recruited from Texas A&M) and Chinese historian Ruth Rogaski (another ex-Princetonian) aside. For now, that means that Vanderbilt won’t really compete with its idol, Princeton, or other major departments with formidable faculty across all fields.

Still, it's quite a start, even if the Last Tycoon’s history department is still an unfinished project. The Last Tycoon's university might be the last gasp of irrational exuberance. Whether or not its investments prove to pay off remains to be seen. The hometown of the Grand Ole Opry might have a harder time retaining its cosmopolites than NYU. But until then, yee haw!
Posted by C. Vann Winchell at 8:19 AM 15 comments:

Amigos from sea to shining sea: I have it on pretty good authority that Walmart won't be closing its Athens branch after all.

But you fans of public universities do not gloat too much. The rich are still trying to get richer.

Harvard, struggling to make ends meet on a mere $26 billion (pass the hankies, I'm verklempt) has scrounged up enough to make an offer to a major historian of the Caribbean. You could say that, even in a period of fiscal restraint, Harvard has more than the usual, er, degrees of freedom.
Posted by C. Vann Winchell at 12:55 PM 20 comments:

Good morning Mr. and Ms. America from border to border and coast to coast and all the ships at sea. Your Perez Hilton, er Perez Hyatt, is tanned, rested, and ready after skipping most of the AHA to join the March on Manchester and do a little swimming and hot tubbing, though I was bumming not to be able to bubble with Ian Lekus, Nick Syrett, and Jen Manion. They were just too busy elsewhere.

I did pick up some juicy gossip in the jacuzzi:

Corporate reorganization alert! Wal-Mart is considering opening a Baltimore branch, right on the Johns Hopkins campus. But like all corporate relocations, it's a zero sum game.

If Baltimore wins, Athens will lose. What will the truckers and confidence men do?

But that's a big if.

One thing for sure. No one will be saving money. But someone will live better.

Still waiting for more news.
Posted by C. Vann Winchell at 5:25 AM 26 comments:

I crashed Laurel Thatcher Ulrich's presidential reception last night and no Secret Service agents were there to notice my presence. Hoped to scoop up some Harvard gossip, since (not surprisingly) her home institution was overrepresented in the room. It was like the (strangely named) smokers that seemed to be fewer and further between tonight, except the food was a lot better and the wine was decent. Harvard's budget can't be that bad.

And yesterday afternoon, I spent a few hours with the GLBTQ protestors and then (shhh) crossed the picket line and rode the slow elevator up to my friend and informant R. Mutt's room and took the above aerial photo of the march as it circled the hotel for a second time. The band marched on. The walls of Jericho did not fall--and the protestors even politely walked past the handful of police officers who guarded the hotel entrance.

I wasn't the only person crossing the picket line, even if my reasons were more principled than theirs. As I sauntered through the lobby I brushed shoulders with more than a few historians who were there despite of (mostly inattentive to) the protest outside. The coffee shop and bar were a little quieter than they had been earlier in the day, and the book display was sleepy--perhaps reflecting the unease that some historians felt in crossing the picket line.

It's said that about 300 people showed up for the demonstration against the Manchester Hyatt. Maybe, but it seemed smaller to me. And not nearly as many members of the crowd looked to be historians as I had expected. I saw a few familiar faces and heard a few more, but most of the crowd's energy seemed to be coming from the local labor activists on hand. It was a fitting protest, both for the mood and energy of this year's still sleepy AHA.
Posted by C. Vann Winchell at 7:47 AM 18 comments: 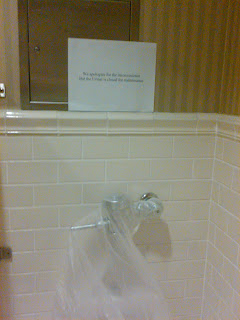 Doug Manchester should have spent his $125,000 on hotel maintenance rather than Proposition 8. The main restroom in the Manchester Hyatt, Saturday, January 9, 2010, where four out of four urinals have been out of order all day. h/t to Anonymous Informant Number 2.
Posted by C. Vann Winchell at 3:15 PM 16 comments:

It's an oft-heard complaint: "History is boring." Well, I don't want to pile onto the obvious, but this is the most boring AHA ever, my randy neighbors excepted. It's surprisingly peaceful here in San Diego, no tsunamis yet.

There are some pluses to the dullness of the AHA. It's actually possible this year to find the time to sit down with friends for a drink rather than rushing by in a hurry from this place to that. And the lack of jobs has lifted a cloud of anxiety that usually hovers over the conference. No need to lace the hotel water with Paxil this year.

Overall, this year's panels have been sparsely attended. No sparks. The book display has been peaceful. And people are trickling in and out of the gargantuan and not-particularly-tasteful Manchester Hyatt, with no signs whatsoever that there's a boycott going on.

It's not that I'm missing out on a good time. I joined a boozy bar crawl last night in the gaslamp district bars (you could pick out the terminally nerdy historians a block away amidst the sea of trendy twenty-somethings prowling the streets, wearing micro black dresses and ubiquitous Abercrombie shirts).

Over margaritas (a toast to you AHB, III, if you are here, anonymously working the crowds), I listened to drearily repetitive bellyaching about salaries (frozen or down), hiring (frozen in most places), graduate admissions (applications up, acceptances down), and even phone service cutoffs (use your own cellphone, Professor). The grumbling, coming from some of the highest paid and most secure members of profession number five, was a little hard to take. Professor Grumbledore: stop bitching. You have tenure in a country that has lost 7 million jobs.

So today, before I join the GLBTQ protest at the Hyatt, I'm heading to the pool. It can't be more boring than the Marriott or Hyatt lobbies.
Posted by C. Vann Winchell at 8:55 AM 13 comments:

C. VANN WINCHELL
I usually get my stuff from people who promised somebody else that they would keep it a secret.

Friend me at Facebook, because the best way to get along is never to forgive an enemy or forget a friend.